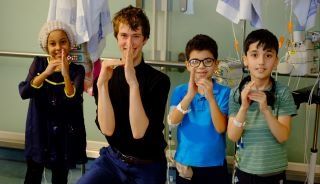 A Magical Screening of The Kid Who Would be King

On 12th March 2019, patients in Chelsea and Westminster Hospital and their families were treated to an extra magical screening of The Kid Who Would Be King, with a surprise visit from a very special guest.

Angus Imrie, who plays young Merlin in the film, came along to meet patients and their families and answer their questions in a Q&A session. He even showed Muntaha, Nasser and Marwan, three of our young patients, how to cast a spell:

Angus said: "The experience of cinema is more than watching the film itself. At the pictures, together, we delve our hearts and souls into a new world.

“MediCinema doesn’t just bring film to people in hospital, but it brings them the full experience of being in a movie theatre. And it doesn’t just give those in hospital the opportunity to escape the reality of their illness, I think it can provide the joy and the strength to help make their battles that little bit easier.

“MediCinema brings cinema to places where its power is most keenly felt, it should be a household name.

“I had a terrific time at the screening of The Kid Who Would Be King, and I think I found some rival Merlins in the form of Muntaha, Nasser and Marwan!!

“Thank you so much for having me."

Thank you so much for coming, Angus! Your visit brought so much joy to our patients and made the screening so magical for all.