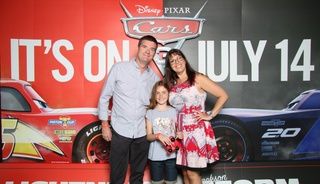 The event, held at Vue Westfield, Shepherd’s Bush was organised in honour of ten of Disney’s affiliated UK-based children’s charities, as they welcomed families and friends to enjoy a unique and memorable opportunity to see the film before it speeds into UK cinemas on 14th July, 2017.

“The gala is an incredibly uplifting beacon that represents the everyday collaborations Disney achieves with affiliate charities in the UK. We are very proud of the positive impact our storytelling, magical moments can offer children and families when they need it the most”

“It was such a special treat for our patient families to go along to the Charity Gala Screening of Cars 3, especially our families from Headley Court rehabilitation centre for injured servicemen and women. MediCinema is all about bringing the magic and joy of the cinema to people in need – enabling patients and their families to spend quality time together doing something ordinary at a time when that’s so difficult to do. Today they’ve had a completely extraordinary cinema experience and family day out, and it has been wonderful! We cannot thank Disney enough for making this happen.”

The turbo-charged CARS 3 sees Owen Wilson return as the voice of legendary ‘Lightning McQueen’ with Armie Hammer joining the voice cast as new character, and McQueen’s new rival, ‘Jackson Storm’. McQueen is blindsided by a new generation of blazing-fast racers and pushed out of the sport he loves. To get back in the game, he will need the help of an eager young race technician, ‘Cruz Ramirez’, with her own plan to win, plus inspiration from the late Fabulous Hudson Hornet and a few unexpected turns. Proving that #95 isn’t through yet will test the heart of a champion on Piston Cup Racing’s biggest stage. The film also stars F1 racing champion Lewis Hamilton who returns to the franchise following his role in Cars 2.