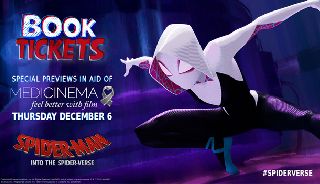 Buy your tickets for special MediCinema previews of SPIDER-MAN: INTO THE SPIDER-VERSE

We are delighted to announce that Sony Pictures have partnered with us to run a set of special preview screenings of SPIDER-MAN: INTO THE SPIDER-VERSE on 6 December. 100% of box office proceeds from these screenings will be donated to help us continue bringing the magic of the cinema experience to patients and their families.

Following on the huge success of our special Christopher Robin previews in August in partnership with Disney, this second set of previews will run at 259 cinemas at a selection of cinema chains including Vue, Cineworld, Odeon, Empire and Showcase, on Thursday 6th December. Both Sony Pictures and the participating cinemas have pledged to donate 100% of their box office proceeds from the screenings. This is only the second time that a film distributor has joined up with its partner cinemas to donate to a charity in this way.

Watch the SPIDER-MAN: INTO THE SPIDER-VERSE trailer to see what you could have the chance to see a whole week before the film releases in the UK on 12 December:

Kat Mason, Chief Executive of MediCinema, said: “We are so excited to be having another set of preview screenings to benefit MediCinema after the huge success of the Christopher Robin screenings in August. We can’t thank Sony and the UK cinema community enough for coming together in this way to raise vital funds for our work. Having the chance to be transported into a movie universe for a few hours makes such an enormous difference to anyone who is seriously ill in hospital. To leave the hospital ward behind to enjoy a magical cinema experience with loved ones can transform someone’s wellbeing.

Please do come out and see the film on the 6th. By buying a ticket, you’ll be helping people to share a precious cinema experience together and feel better with film.”

Ian George, MD of Sony Pictures Releasing UK said: “We are delighted to partner with MediCinema and help raise funds for an extraordinary charity that harnesses the power of film in such a valuable and positive way. For us to be able to share SPIDER-MAN: INTO THE SPIDER-VERSE and benefit patients and families in need, seems a wonderfully appropriate partnership.”

Kevin Styles, MD of Vue UK & Ireland, said: “We are delighted to be supporting the MediCinema special screening of SPIDER-MAN: INTO THE SPIDER-VERSE across our estate this December. Vue are proud partners of MediCinema, and are committed to helping them bring the inimitable big screen experience to as many hospitals as possible. Screenings such as these can help raise much needed funds to help them to continue their transformational work.”