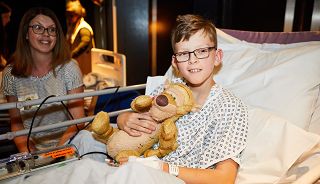 Thank you, Winnie the Pooh!

On 16th August, preview screenings of Disney's Christopher Robin at 237 cinemas throughout the country raised £133,069 - enough to give over 9,000 MediCinema experiences to patients and families.

16 different cinema chains, including Vue, Cineworld, Picturehouse, Everyman, the Light, and Empire, took part in the groundbreaking collaboration with Disney, the UK Cinema Association and their members.

15 cinemas nearly sold out with some having to add additional screenings, and over 10,000 tickets were sold.

In addition to the support of our patron, Ewan McGregor, who stars as Christopher Robin and urged people to buy tickets, the public also got behind us!

Thank you to all our partners and everyone who bought tickets. The collaboration was so successful, we plan on running two similar collaborations with the film industry per year! In fact, we already have our next one coming up: on Thursday 6th December, Sony Pictures will run a set of special preview screenings of SPIDER-MAN: INTO THE SPIDER-VERSE. Click here to find out more and here to book your tickets. If you can't make 6th December, don't worry, simply keep an eye out for other upcoming previews in aid of MediCinema, and together we can create time together for over 20,000 patients and families.