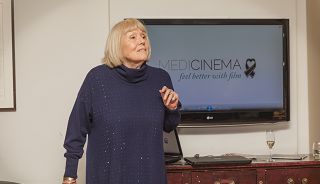 Earlier this year Dame Diana Rigg, acclaimed English actress and MediCinema patron, spoke at an event to inspire people to support MediCinema. Here are her words:

‘MediCinema has two magical properties; one that it is practical and two that it is magical. Now the practical side of it is of course that there is a functioning cinema which doubles as a lecture room so it is no wasted space and people can be wheeled in - with whatever they need as part of their medication or treatment - to see a film.

‘Added to which my grandson, 9 months old, was having an emergency operation this Christmas at Chelsea and Westminster Hospital. He was too young obviously to go, but my daughter said she witnessed the dedication and care of the MediCinema people who came round to invite patients – the old and the young – to go and see the film, and she witnessed the radiance that followed it.

‘And ladies and gentlemen, you are here, and I and asking you to support this wonderful venture. The practicality is there, the magic is there, we just need money. So when you go away and think about your priorities in life, think about two things – practicality and magic. Thank you.’

Thank you so much, Dame Diana, and all our patrons, for your invaluable support.

Dame Diana is known for playing Emma Peel in The Avengers, Countess Teresa di Vicenzo, wife of James Bond in On Her Majesty’s Secret Service and Olenna Tyrell in Game of Thrones.