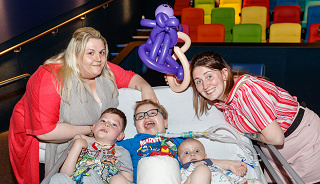 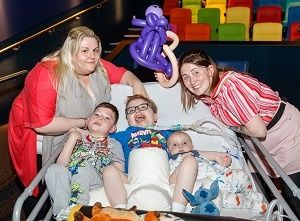 The afternoon began in the cinema which is run in partnership with the Glasgow Children’s Hospital Charity (on children screenings). As soon as the youngsters arrived, balloon artists created some Dora inspired goodies including Dora’s famous simian sidekick Boots and some Amazonian creepy crawlies. Following the crafty session, star of the film Isabela Moner who plays the intrepid adventurer, appeared on the big screen with a filmed introduction especially for children at the Glasgow event. Patients and family were delighted to hear from the tinsel town teen and have the chance to see Dora and The Lost City of Gold. Dayna Nicol who is the mother of young patient Thomas Graham, and both attended the screening said “It means so much to myself and Thomas days like today, giving us a chance to do normal things as a family, spending time outside the ward and for Thomas to be able to experience seeing a movie like Dora and the Lost City of Gold on the big screen for the first time…”

MediCinema partnered with Paramount Pictures on the Royal Hospital for Children, MediCinema screening alongside a Nationwide Preview Screening of Dora and the Lost City of Gold taking place a full 5 days before the general release.

The preview will be open to the public across over 300 cinema sites, with screenings across Scotland. All monies raised will be going towards MediCinema, enabling them to help those who need it most feel better with Cinema Therapy.

To book your Nationwide Preview Screening tickets of Dora and the Lost City of Gold in aid of MediCinema, this Sunday August 11th visit : http://www.doramovie.co.uk/medicinema-screenings/ 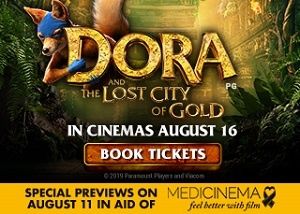