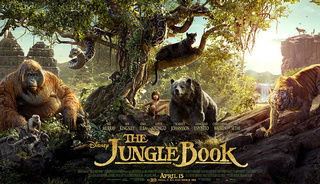 On Wednesday 13th April the first MediCinema in Italy opened its door inside the University Hospital Agostino Gemelli in Rome to an amazing preview of The Jungle Book.

To celebrate the opening of the MediCinema at the Policlinico A. Gemelli, an exclusive preview screening of The Jungle Book was held on the night which was attended by both patients, families and also the many people who made this project possible.

As with all MediCinemas, the space is able to accommodate beds and wheelchairs, and is located between the 8th and 9th floor of the hospital complex. The cinema itself can accommodate 130 people including patients, family members, friends, volunteers and support staff.

The project was implemented with the support of several partners, first of all The Walt Disney Company Italy who from the beginning believed in the project, becoming the first advocate; and also the contribution of Rai, by promoting fundraising on its networks in January this year and the ongoing partnership with Rai Cinema.

Fulvia Salvi, President of Medicinema Italy Onlus said: "In two years we have achieved something that never existed in Italy and that might have seemed an impossible dream. Today, thanks to Fondazione Policlinico Universitario A. Gemelli, Catholic University of the Sacred Heart and to all our supporters, we inaugurate the largest therapy room with cinema in Europe and a path that puts Italy at the center of innovation in therapy the relief and in scientific research linked to it. The generosity of Disney Italy, the first proponent and major contributor with a series of major donations, opened the way and supported the path to the realization of the project, launching a syndicate of extraordinary solidarity ".

Daniel Frigo, CEO of The Walt Disney Company Italy, in taking the floor said: "Bringing the magic of entertainment to children and families in difficulties, is a core value for our company. For this reason, for many years, we have maintained a professional relationship with MediCinema, both in Italy and in England. In 2014 we started an awareness and fundraising campaign for the construction of MediCinema at the Gemelli, involving various celebrities and launching a series of initiatives, including the ability to use images from the film Disney Big Hero 6. It’s wonderful to attend the project now fully completed and it recently celebrated with the first screening of the film inside the MediCinema Disney Zootroopolis which was dedicated to the children of the hospital and their families ".

The Fondazione Policlinico Universitario A. Gemelli has advanced years in diagnostics and medical and surgical treatment and is recognized as a center of national and international excellence. The hospital humanization is a new area of ​​growth, which puts the care of the person in its entirety and complexity at the center of interest of the entire medical community.

Giovanni Raimondi, President of the Fondazione Policlinico Universitario A. Gemelli said: "Today is a special day for the Policlinico Gemelli. Thanks to the happy meeting with MediCinema and hard work of so many who, in different roles and different responsibilities have contributed with passion, quality and dedication has been reached the goal of the opening of this beautiful cinema, specifically designed for the patients. With all our many supporters, we celebrate a result that underscores our commitment to the humanization of hospital life. "

We are incredibly proud of all the hardwork that has gone into this, and wish all our friends at MediCinema Italy the best of luck with the new MediCinema!