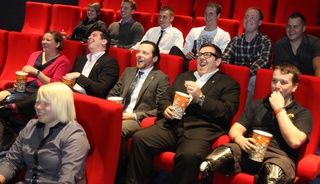 An Important Update on Headley Court

The Ministry of Defence has recently moved the Defence Military Rehabilitation Centre (DMRC) Headley Court (the site of the Royal British Legion MediCinema) to a new site at Stanford Hall, Loughborough. As a result, the MediCinema is currently closed.

Since the Royal British Legion MediCinema opened by Simon Pegg and Nick Frost in 2012, we have given 18,937 cinema experiences to servicemen and women who have experienced life-changing injuries and their families. Over the years, MediCinema has played a key role in their rehabilitation and care, and we are proud to have brought the magic and escapism of the cinema to those who have served our country, like Kgn. Anthony Cooper. He told us about the difference MediCinema made to him:

‘When you are around the same people all the time in a compact environment, it can become disheartening. I am a person who likes to get out there and talk to people.  If I can’t get out I become frustrated. I have been here so long (4 years) at DMRC Headley Court people jest in calling me a Veteran.'

‘The cinema has become my main release. Anyone can come to the cinema; therefore I get to meet new groups of people. It’s good to know that there are other people with similar injuries, and have the opportunity to share thoughts with them.

‘At Headley Court we work extremely hard each day, and we are pushed to our limits. I am often very much need of a chill out after a full days rehab. The cinema itself is excellent, lots of space and you can choose who you sit with. You can pull yourself on railings if you’re tired of pulling the wheelchair up ramps, and the floor is clean so you can easily climb from your wheelchair into a comfy seat. I could not do this in a normal cinema and I don’t like it when people look.

‘If it were not for the MediCinema, my little group (Neuro ward) would feel even smaller.  The cinema links me in, and it helps me find a positive common space with other patients.’

Here are a few photographic highlights from the last six years:

We’re truly grateful to the Royal British Legion for generously supporting the MediCinema at Headley Court everyone at the DMRC for all their hard work over the years. It is only thanks to you that the MediCinema has enabled so many patients to feel better with film. We hope to open a MediCinema in the new Defence National Military Centre once the clinical facility is fully settled and an appropriate site for the MediCinema has been agreed.