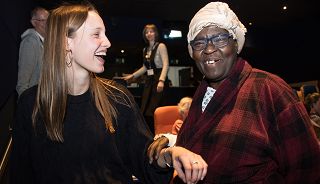 The results from our latest bi-annual survey are back! Here are a few key findings:

We’re particularly proud that 95% said they believe attending MediCinema helps to reduce isolation, but why is isolation such a problem and how exactly does MediCinema help?

Isolation and loneliness are so detrimental to health that the government appointed a Minister for Loneliness earlier this year. Research shows that lacking social connections is as damaging to our health as smoking 15 cigarettes a day, both mentally and physically: loneliness increases the risk of mortality by 26% and low social interaction is predictive of suicide in older age (Campaign to End Loneliness). Social networks and friendships not only have an impact on reducing the risk of mortality or developing certain diseases, but they also help individuals to recover when they do fall ill, which is why it’s so important that people stay connected while in hospital.

However, being in hospital cuts people off from the outside world. While some may have visitors, the time they are able to spend together is always limited and often strained by the strangeness of the hospital environment. Similarly it’s hard to make connections with others on the same ward when the only thing you have in common is that you’re both in hospital.

Going to MediCinema is so much more than the chance to do something you couldn’t normally do while in hospital, it takes patients and their families out of the strangeness of the hospital environment and enables them to relax and feel more at ease in each other’s company:

‘When my husband visits me on the ward he’s awkward and doesn’t know whether to hug me or what to say. MediCinema lets us simply sit and be together, hold hands and enjoy each other’s company without the anxiety of him not knowing how to behave.’

Anna, a patient in the Royal Victoria Infirmary

It gives patients something other than their illness they can talk about, whether with visitors, staff, nurses, our volunteers or other patients on their ward:

‘It wonderfully restored conversation with my friends - I was able to talk about the films they themselves were seeing in the cinema at the time and talk about something other than my recovery.’

‘I came back to the ward singing the cinema’s praises and telling the other patients all about it. This was a good way to chat to other patients as well as we started to talk about our favourite films.’

Ann, a patient in Chelsea and Westminster Hospital

It also gives patients from other wards the chance to meet and form friendships with each other:

‘My daughter comes of an afternoon when she can and my sister works full-time so I haven’t been getting many visitors. So for me MediCinema is a social thing. There’s a lad who came in at the same time as me so we go together. He’s on a totally different ward so I wouldn’t have met him otherwise.’

Peter Todd, a patient in the Royal Victoria Infirmary.

Some patients don’t get any visitors at all, so even just chatting to our volunteers as they bring them to and from the screenings makes a huge difference:

‘Going to the cinema makes me feel happy, otherwise, I’m stuck here in my bed with no visitors. It’s the only thing I look forward to. Being able to see other people, even though it’s in a hospital, makes you feel like you’re not alone. And I’ve made friends, with a couple of the volunteers coming up to visit me on Christmas day, which meant so much, as my condition isolates me.’

Stacey, a patient in Guy’s Hospital

As Nicks, one of our cinema managers, said in a recent video, ‘MediCinema means community’. For inpatients and outpatients old and young, MediCinema is a safe space where they can come together and not be alone.