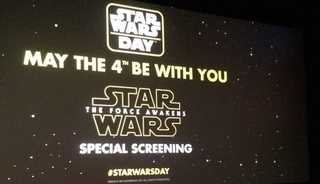 The force was strong in hospitals throughout the UK on May 4th when all seven of our MediCinemas screened ‘Star Wars™: The Force Awakens’ for our patients and welcomed some very special guests from a galaxy far, far away.

BB-8 visited the Yorkhill MediCinema in Southern General Hospital, Glasgow, C-3PO and R2-D2 teamed up to bring the light side to patients in St Thomas’ Hospital, Westminster, and Stormtroopers brought the Galactic Empire to Serennu Children’s Centre, Newport on 2nd May and the Royal Victoria Infirmary, Newcastle, on 4th May.

Click here for an article about the special screening in our MediCinema in the Royal Victoria Infirmary.

Special screenings of ‘Star Wars™: The Force Awakens’ also took place for patients at the ICAP MediCinema in Guy’s Hospital, Southwark, the CW+ MediCinema in Chelsea and Westminster Hospital, Chelsea, and the Royal British Legion MediCinema in Headley Court, the Defence Military Rehabilitation Centre in Epsom. Goody bags were given to all patients at every screening, containing products donated by Star Wars toy licensees.

Mr Donnelly, father of one of the young patients who enjoyed this special screening, said:

‘My 12 year old daughter, Jennifer, has been admitted to the Queen Elizabeth University Hospital for 14 days now and has been one of the children lucky enough to be part of this special day. It is fantastic that both Disney and MediCinema have combined to show ‘Star Wars™: The Force Awakens’ and have also given gifts to children and have made them feel even more special than they normally are. I am 100% certain that Jennifer has not smiled so much since the onset of her illness 18 months ago. She especially enjoyed meeting some of the characters from Star Wars. Thank you all.’

‘It was such a fantastic treat for our patients to have the droids and Stormtroopers visit before this special screening. Some of our patients are in hospital for months or even years, which is really difficult, so to have such an out of this world experience during that time makes a huge difference. We cannot thank Disney and LucasFilm enough for making this happen for our patients.’

The visit and screening were part of ‘May the Fourth’ celebrations, a date recognised by Star Wars fans around the world.