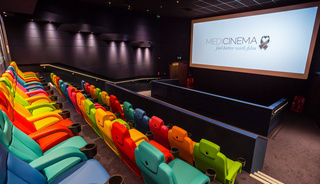 Hospital patients will have the opportunity to watch complimentary films at their bedsides from Friday 10th April.

MediCinema is a charity that builds and runs state of the art cinemas in hospitals with space for beds, wheelchairs and equipment.   We have been working closely with NHS Trusts for 20 years to give patients and their families the opportunity to do something that feels a bit normal – to visit a cinema and enjoy the shared experience of watching the latest release together.  Being in hospital can be isolating and frightening.  Watching a film in one of our cinemas along with fellow patients or friends and family can bring a sense of normality and provide a much-needed escape from the wards, and their situation, for just for a couple of hours.  On a recent survey of MediCinema visitors, 93% said it helped them feel less isolated and 92% said it helped to reduce anxiety and stress.

MediCinema’s regular in-hospital cinema services were suspended in mid-March, just as regular cinemas around the country are now shuttered up.

Kat Mason, MediCinema’s CEO said: “Unfortunately, we can now all relate in some way to the feelings of loneliness, isolation and worry that patients in hospital feel.  While our core cinema services are not currently running, and in-person interactions with friends and family are so much harder, we are so pleased to be able to offer patients on the wards some support and distraction by taking some great films straight to their bedsides instead.”

On this new channel, each week in four of the six hospitals in which MediCinema operates, patients will be able to watch films such as The Lion King (2019), Toy Story 4, A Dog’s Journey and Pokémon: Detective Pikachu at no cost thanks to Hospedia, Filmbankmedia and their distributor partners which include Disney, Warner Brothers, eOne, Sony, Paramount Pictures and Universal Pictures.

To be able to provide this service to patients on the wards now, and to make sure MediCinema can reopen its in-hospital cinemas again for patients and their families when it’s safe to do, please go to our donate page.