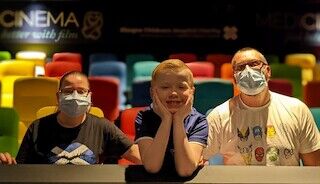 At long last we’re getting back to the cinema – and that includes some patients at the Royal Hospital for Children in Glasgow, who are lucky enough to have their own big screen.

This week they have been swapping their beds for cinema seats, as the MediCinema opened once again after Covid restrictions were eased.

Ready for action in the front seat was 7-year-old Riley from Wishaw, who had a private screening with mum Louise and dad David.

Riley, who has spent the last few months in hospital, was really excited for the movie – Raya and The Last Dragon.

Mum Louise said: ”This was such a special treat for us as a family. For a few hours at least we felt ‘normal;’ again. Because Riley has been in so long and we have been living on site too at Ronald McDonald House, there’s not been a chance to do normal family activities like this.

“Everyone has been missing going to the cinema, not least of which Riley, who loves the whole movie experience.

“We were blown away when we saw the MediCinema at first – it looks like a real cinema and is right here in the middle of the hospital. We were able to forget everything else for a few hours; it was lovely. Thanks to everyone involved for making Riley’s day.”

Sheila Hay Pacifico runs the MediCinema in the Royal Hospital for Children.

Sheila said: “We are all over the moon to be back, doing what we do best, entertaining our patients. We’ve been closed most of the time during the pandemic – open for just a a couple of weeks in December. We are now open again, for paediatric private family screenings at the moment. We hope to open for larger socially distanced and adult screenings in the coming weeks.

“Seeing Riley’s face makes it all worthwhile and reminds me just how much I love my job. It’s great to be back!”