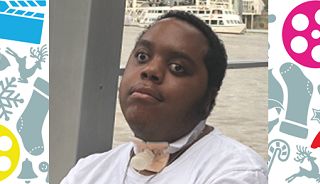 A Film This Christmas

'I’m so happy this service exists. For long term patients like King, MediCinema is like a window to a new world.’
Irene, King's mum

This Christmas, we’re asking our supporters to help us raise £1,000, and if we do, six of our partners will donate £1,000, too, raising enough money to give a film this Christmas to over 600 patients like King.

At just 18 years of age, King and his family received the shocking diagnosis that he had developed a brain lymphoma, a rare cancer of the lymphatic system. Before this diagnosis he was a healthy teenager who loved school and playing football. His illness changed everything.

King stayed in hospital for eighteen months after his diagnosis, first at Guy’s Hospital and later at St Thomas’. Ten months ago he had to be fitted with a tracheostomy. Since then he has only been able to communicate through gestures and nods.

'It just happened and it turned our life upside down. Emotionally it’s been really hard. For our whole family, but especially for King.

'He went through a really hard time initially. He suffered from depression and felt life wasn’t worth living anymore. It’s not been easy.’

While King was in the Critical Care Unit in Guy’s Hospital, his nurses approached us and asked if we could find a way to invite King along to a screening. They knew how difficult King was finding things and how much of a difference MediCinema could make to King’s time in hospital.

When the lights went down and the opening titles began, King relaxed. For the first time since his diagnosis, he could forget his illness and all the worries that went with it.

'I was so happy when King agreed to go to the cinema the first time. I watched him relax and smile. He loved it and has since been many times, with me and his sisters and on his own. He really looks forward to it now – he’ll even watch a sci-fi film even though it’s not his type!'

In his own words, which he communicated to his mum, going to MediCinema was one of the times during his long hospital stay that he 'felt normal'.

'MediCinema has been therapeutic for King, but also for the whole family. I would probably not go out with the girls under these circumstances, but MediCinema gives us a regular chance to do something together. For me, to have all my children in the same room watching a real movie in a real cinema has been precious.

'Please support their Christmas Appeal and help MediCinema continue to give patients like King the chance to feel normal.'

It costs £11 to give one patient like King the gift of film. Please click here to donate £11, or whatever you can afford, and if we raise £1,000, six of our partners, including the following, will each donate £1,000, too.

Together, we can give a film this Christmas to over 600 patients like King.