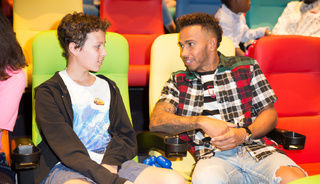 Patients in Chelsea and Westminster Hospital were treated to an afternoon in the fast lane on Wednesday when Lewis Hamilton, the voice of Hamilton in Cars 3, surprised them at a special pre-release screening of the film in our CW+ MediCinema.

Lewis Hamilton joined in the fun in the foyer at CW+ MediCinema before the screening, where young patients and their families had the chance to meet the British Formula 1 racing champion. Hamilton then introduced the very special screening of Disney.Pixar Cars 3 before visiting other patients on wards in Chelsea and Westminster Hospital who were unable to attend the screening.

Hamilton said, "It was really cool to put on a screening of Cars 3 for the children and it's great that they're so excited to see it, I can't wait to see it myself! MediCinema is wonderful, the nurses, staff and volunteers at the cinema and hospital are brilliant and it was great to get to go along and meet some of them."

Patient Imani attended with her mum, Ebony, and said: “I've been in the hospital for nearly a week and felt very bored but in the MediCinema I've had lots of fun! I was really excited to meet Lewis Hamilton, we talked all about his racing, and I completely loved coming to MediCinema for this special screening - we thought Cars 3 was a roaring success! My dad is not here and is so jealous.”

Gabby brought her two-year-old son, Alexander. She said: "Alexander has been contagious and stuck his hospital room for the past 12 days, so it was so amazing for him to finally be able to get out. He is obsessed with cars so this was perfect for him, and MediCinema was actually his first cinema experience ever! We mums go a bit stir-crazy being stuck in here too, so this was the perfect end to a very difficult 2 weeks!"

Kat Mason, our CEO, said: “It was such a wonderful treat for our young patients to meet Lewis Hamilton and to see Cars 3 over a week before release. It was particularly special for patients unable to come to the screening to get to meet Lewis – some of whom are in hospital for months at a time. We cannot thank Disney enough for making this happen for our patients and Lewis for coming and making the screening so special.”

The third film in the popular Pixar franchise, Cars, is due to be released on 14th July, over a week after our young patients in Chelsea and Westminster Hospital had the chance to see it.