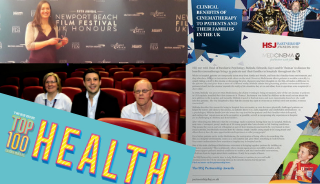 We have had a successful year so far at MediCinema, with a number of industry awards, national and regional press coverage as well as new partnerships under our belt.

Just a few highlights include our BBC Scotland interview with MediCinema Manager Sheila Pacifico at The Queen Elizabeth Univesity Hospital campus and our newly announced funding partnership with the National Youth Film Academy.

Detailed below is a selection of some of this year’s award, partnership and press happenings:

We are now official partners of the HJS Partnership Awards!

The HSJ Partnership Awards celebrate the most effective partnerships between the private, third sector and NHS. The projects showcased at the awards are changing the lives of patients through effective and successful working with NHS teams.

Each year, The HSJ Partnership Awards showcase the most trusted partnerships with the NHS, featured in the 2018 Projects Showcase through a rigorous and challenging entry and judging programme.

As well as being nominated as the HSJ partnership awards partner, we conducted an interview between the Head of Paediatric Psychology at Guys and St Thomas’ Hospital, Melinda Edwards, and the HSJ Partnership Awards team, published on their website. The partnership also led to an announcement in leading health trade outlet HSJ.

Earlier this year, our founder and honorary president Christine Hill MBE was recognised by The Big Issue as one of the Top 100 Changemakers 2019 in the health sector.

Christine’s acknowledgment in The Big Issue is for her tireless work establishing MediCinema as one of the most successful health and film charities in the UK. On the impact of MediCinema, The Big Issue says, 'Having access to something as simple as a movie screening while in hospital has been proven to increase patient wellbeing, reduce their anxiety and isolation and restore a sense of normality for those enduring an otherwise stressful time.'

Visit the Big Issue website for the full write-up.

Our CEO, Kat Mason, delivered a passionate speech on the benefits of MediCinema and took time to thank all of our amazing industry supporters in the audience. As Kat stated in her speech that evening, 'MediCinema would simply not be possible without the support from those in the film industry, many of whom are sitting in the audience tonight'.

From all of us at MediCinema, thank you to the festival for providing us with another platform to raise awareness of the work we do.

We are delighted to announce that The National Youth Film Academy have partnered with MediCinema to help us on our mission to bring the magic of cinema to more patients and their families.

The new partnership will provide £28,000 of support towards the MediCinema at the Royal Victoria Infirmary (RVI) in Newcastle. Rob Earnshaw, Chief Executive and founder of the National Youth Film Academy, said, 'There’s always something enchanting about the cinema as people’s faces light up when they recall their favourite film or when they visit the pictures for the first time.'

The partnership has been covered in various publications such as Business up North, and will provide the funds for many more film experiences for those who need it most.