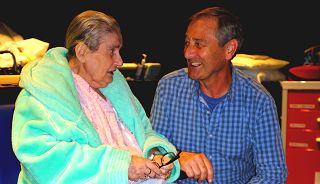 We’ve been able to offer our patients and their families some very special screenings over the last few months! Here are a few examples:

Patients at Chelsea and Westminster Hospital enjoyed a special screening of Victoria and Abdul in our CW+ MediCinema, including a Q&A session with Julian Wadham who plays Alick. Patient Thelma said: ‘[CW+ MediCinema] is a brilliant idea. It takes you out of the ward and gets you to meet other people. The applause wasn’t good enough, it was brilliant.’

Breathe tells the true story of Robin and Diana Cavendish, producer Jonathan Cavendish’s parents who dared to escape hospital and live life to the full in the face of Robin’s devastating illness: polio. We ran two special screenings of this inspiring film – one for polio patients and another with special guests, including Baroness Jane Campbell, which was followed by a Q&A with Jonathan Cavendish. Thank you so much to Professor Nicholas Hart, clinical and academic director of Lane Fox Respiratory Unit in St Thomas’ Hospital, for arranging this Q&A after the screening in our St Thomas’ MediCinema.

'I really loved the film. Thank you again for giving us the chance to see it. MediCinema provide a very good service which enables the hospital patients a treat whilst away from home. A big thank you.' (A polio patient who came to the special screening.)

Thanks to Together Films and writer and director Jennifer Brea, we showed two pre-release screenings of Unrest in our CW+ MediCinema in Chelsea and Westminster Hospital and our MediCinema in St Thomas’ Hospital. Unrest tells the story of Jennifer's battle with ME (Myalgic Encephalomyelitis, also known as Chronic Fatigue Syndrome) and how she and her husband navigate their relationship in light of her illness.

In collaboration with Breathe Arts Health Research, a social enterprise which designs scientifically researched creative programmes to breathe life into the healthcare system, we held an evening of silent comedy shorts with live musical accompaniment in Guy’s Hospital.