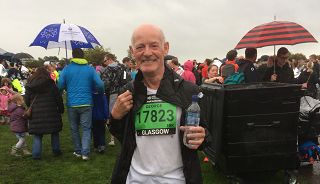 Our super supporters have raised vital funds for us in a wide variety of ways:

Five years ago George Burns, aged 65 and having never run seriously before, decided to take on the Great Glasgow Run to raise funds for MediCinema. Since then, he has run every year and has raised more than £4,500 in total! That’s enough to fund 16 MediCinema screenings and bring the magic of cinema to over 400 patients and their families! Now aged 70, he recently completed the 10k in 57 minutes.

He said: ‘When Sheila [George’s cousin and the manager of our Yorkhill MediCinema] told me about it I was really impressed by this facility and thought it was a great idea giving patients in hospital a wee escape from the day to day hospital routine.

‘This inspired me to join a group of friends from my local pub and take part in the Great Scottish Run 10K raising funds for MediCinema.

‘Also, I was fortunate to attend an event at the hospital where I had the privilege of meeting some of the patients and their families who had benefitted personally from MediCinema. Listening to their experiences has also given me the motivation to continue fundraising for as long as possible.’

Thank you so much, George. You truly are an inspiration.

Four fantastic fundraisers took on the Royal Parks Half Marathon for MediCinema this year, including our very own cinema manager of the CW+ MediCinema in Chelsea and Westminster Hospital, Simon Hickson. Altogether they raised £4,423, that’s enough to fund 16 screenings and bring the magic of cinema to over 400 patients and their families.

As part of our brand new charity partnership with Backyard Cinema, a themed cinema in Borough, they will be asking their customers if they would like to donate £1 to MediCinema when purchasing their cinema tickets. To encourage more supporters to donate, Backyard Cinemas, who also have a pop-up cinema at the Winterville festival on Clapham Common, will feature us on their website and promote us through their social media channels. They are also showing the MediCinema advert before every screening to reinforce our partnership, and we plan to welcome their employees as volunteers in our London sites.

Twenty of the biggest names in the film and media industry battled it out on 24th October to win the quiz and take home the Halloween Night Fever trophy. It was close, but in the end it was the team from 20th Century Fox who triumphed, beating The Telegraph and depriving them of their fourth win in a row.

Vue Entertainment won Best Dressed Table for the first time, and Entertainment One won the 2017 Media Package for a record-breaking £40,000.