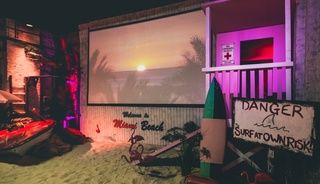 Having volunteered at one of our children's screenings, Kelly Warnell, Global Head of Film at ESI Media, decided to watch a film a day for 365 days to raise awareness of MediCinema. This Monday 7th August is the last day of her challenge, and to celebrate she has arranged a special charity screening of the classic film Superman (1978).

The screening will take place at The Backyard Cinema and 100% of the subsidised ticket revenue will be donated to us! To buy your ticket, please visit:

In Kelly’s own words: “I thought long and hard about what I could do. Then it came to me… I’ll watch a film every day without fail or exception for a year… I will go to the cinema as many times as I humanly possibly can…! I thought it would be easy… it has not been easy!”

Over the past year, Kelly has been to the cinema over 200 times and documented her challenge on Instagram @afilmaday365. She has managed to dedicate two hours at least every day in order to complete the challenge, despite personal and professional commitments.

In actual figures that is:

Kelly says: “The film industry has been extremely supportive towards the challenge, as have my employers…I am now in my last week and want to make my efforts count.”

Customers at the special screening will step into Miami Beach, swap their shoes for flip flips, feel the sand between their toes and enjoy a Pina Colada, whilst watching the original Man of Steel, Christopher Reeves, in the 1978 classic Superman.

Dominic Davies, Founder of Backyard Cinema, says: “This is such a great cause, it’s a pleasure to host Kelly’s final screening here. Raising money for charity through watching film really excites us, and what better way to celebrate Kelly’s achievement than watching Superman on a beach.”

Kat Mason, MediCinema CEO says: “We’re all so grateful to Kelly for taking on this challenge for us. MediCinema are all about bringing the joy and escapism of the cinema to hospital patients and their families, so watching a film every single day is a fantastic way to raise awareness. The money raised from this special screening of Superman will enable us to give patients a break from the ward and much-needed sense of normality. Thank you so much to Kelly and everyone involved!”

Tickets will sell out fast, so buy your ticket today: