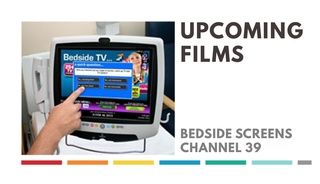 What's on our Hospital Bedside Screens

Here are the latest films / events being shown for free on bedside screens in the following hospitals: Guys, St Thomas’, Chelsea and Westminster, Newcastle Royal Victoria Infirmary, the Manchester Royal Infirmary and the Newcastle Freeman

Tune into Channel 39 from 8am to 10pm, where films will run every two hours, to watch:

MediCinema would like to thank Hospedia, Filmbankmedia and our many film distribution partners for their help in providing this free service for NHS patients