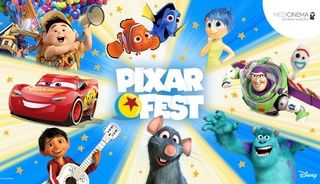 MediCinema is the charity partner for Disney's Pixar Fest

Marking 25 years of Pixar movies and magic, and a 20-year relationship with MediCinema, we are thrilled to be the charity partner for Disney’s Pixar Fest – a virtual month-long family festival which starts Sunday 9th August, with activities and entertainment for kids and families over the summer holidays and Pixar movies and shorts on Disney+.

And to show their support, Disney are kicking off Pixar Fest with an incredible £750,000 donation to MediCinema to help the planning and build of four new in-hospital cinemas in the UK and Italy over the next six years.  This is part of its ongoing commitment to provide comfort and inspiration to children in hospital, creating Moments that Matter for those who need them most.

Fans and supporters can also help to raise funds for MediCinema through Pixar Fest’s Charity Tuesdays, starting 11th August, to win fantastic money-can’t-buy Pixar prizes, including a drawing lesson with a Pixar artist and an exclusive piece of Pixar artwork through prize draws run by MediCinema

Kat Mason, Chief Executive of MediCinema said: “In our 20th anniversary year and 20 years of working with Disney, we are incredibly happy to be the recipient of this donation that will help ensure our cinema services can impact so many more children and their families. In addition, all money raised from the prize draws will help to make sure we can keep our current services running, which is more important now than ever for children and their families facing time spent in hospital."

Sara Hanson, ‎Director, Charitable Programmes, EMEA - ‎The Walt Disney Company said, “As part of our long-term relationship, we work with MediCinema to create Moments that Matter to help build emotional resilience. And so we’re delighted to continue our support through this Disney Pixar Fest partnership, where we can leverage the power of our world-class storytelling and characters and some of the most iconic and unique moments in filmmaking history, to deliver real comfort and inspiration to families with children facing serious illness.”

MediCinema nurses and volunteers have shortlisted a special Moments that Matter category in Pixar Fest’s The Golden Lamp Awards for fans to vote for their top Pixar Moment. Talent including Tony Hale, animators and celebrities including Katie Piper, Danny Jones, Mylene Klass and Aston Merrygold will also be unveiling their favourite Pixar moment over the last 25 years.

Patients with the MediCinema bedside channel will also be able to join the live Sunday watchalongs for free and will receive specially designed activity packs. The watchalongs will take place on Disney’s social channels, with moves streamed on Disney+ including Toy Story (9th August), Cars (16th August), Inside Out (23rd August) and The Incredibles (30th August)

MediCinema and Disney’s long-standing relationship began 20 years ago when the first film screened at the very first MediCinema at St Thomas’ Hospital in London was Disney’s Inspector Gadget. This enduring partnership now sees the organisations working together to create meaningful resources and experiences in hospitals for children and those closest to them, that help build emotional resilience, reduce isolation and help people connect with others – all with the help of everyone’s favourite Disney films and characters.