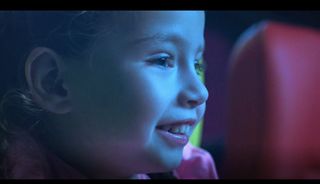 “The CW+ MediCinema has been such a huge thing for us. Through years in hospital, it has given Sienna the invaluable chance to be the same as other children: the chance to do things an ordinary family, and ordinary child, and ordinary person would do – and that means so much.”

Sienna has spent most of her four years in Chelsea and Westminster Hospital in London, having been born with a severe congenital diaphragmatic hernia (CDH), a potentially fatal birth defect, as well as complex heart defects.

In most cases, CDH babies have a 50% chance of survival. Doctors gave Sienna a 10-15% chance of survival due to how her lungs were developing. Sienna did survive – thanks to the excellent support and clinical care of the doctors and nurses at Chelsea and Westminster Hospital – but her first four years have not been easy.

Sienna’s first four months were spent in neonatal intensive care, she went home for a short spell but then was readmitted longterm at eight months old, when the right-hand side of her heart was enlarged and failing. She had open heart surgery, battled two life-threatening bouts of sepsis, and started the complex and now life-long treatment of receiving all her nutrition via a central line into the main vein in her heart for 12-16 hours daily (TPN). The hospital and its staff was all that she knew, and Sienna’s mum Mandy’s life also switched entirely to living in the hospital at Sienna’s bedside rather than at home.

After almost two years, just before her second Christmas, Sienna went home again, and since then has been in and out of hospital – this year is the first time she and her mum, Mandy, have spent more time at home than in the hospital. But her hospital bag is always packed and she is readmitted every time she falls even slightly unwell, for anything between three days and three weeks each time.

Mandy spoke to us about Sienna’s difficult start to life and how the CW+ MediCinema has helped:

“It’s so hard to describe what our lives are like as they’re just our lives – we both lived for nearly her first two years 100% in the hospital, and still practically live there now. Sienna knows it better than home, and it is so hard to be or do anything other people would class as ‘normal’.

It is difficult to describe what spending 24 hours in one room for 4-6 weeks does to a toddler and means as a parent, on top of the worry and stress. Everything you know and can do is shrunk into that space and four walls, you forget there’s life outside, boredom takes over, what there is to talk about dries up, and Sienna’s behavior changes. The CW+ MediCinema has been a lifeline for us throughout: coming out of that to go to the cinema always gives Sienna the break she, and I, need to cope.

The first time we went to the CW+ MediCinema – and we’ve been so many I’ve lost count! – Sienna had just come back from the intensive care unit having had life threatening sepsis. She was very ill and needed lots of treatment in isolation and then on the ward, and every bit of treatment she had to have was a battle. But that first time in the cinema, the nurse had to give her an IV antibiotic half way through the film, and she was so distracted and happy it was easy – she didn’t even notice.

When your life is so out of the ordinary, the CW+ MediCinema offers us a welcome escape, that precious normality that ordinary families experience – doing something together as a family, laughing, enjoying, just being, not medical. Where she can’t play with other children, Sienna can go to the cinema with them, and escape into the brightly coloured chairs and the film. Paddington has been her absolute favourite so far!

From the moment the cinema manager does their ward round in the afternoon to tell us what’s showing, the atmosphere in the ward completely changes – it lifts Sienna and her friends’ moods to know they’re getting off the ward and coming to the cinema – there’s something to look forward to, from the walk up to the cinema, to the colourful seats and real cinema experience, to the film.

It is so hard to start conversations, and to make friends, when you’re in hospital for such a long time – you run out of things to talk about – but relationships are what keep you sane. And the CW+ MediCinema has been such an important part of that for me and Sienna, giving us something to talk about together and with other families that is neutral, normal and fun. For me, the walk back after the film has always been one of the highlights for that very reason. I would never have got through the last four years without those friendships – and discussing the film afterwards has been so important in helping me and Sienna build them. Sienna’s made some very close friends, one in particular, through the cinema – and we see him and his family regularly, even outside of hospital.

For me as a parent of a very sick child, the adult screenings have also been a godsend. I can get away for a few hours, safe in the knowledge that Sienna is sleeping downstairs and I am only 60 seconds away should anything happen – but I can escape, switch off, relax and have some time to myself for once. I hadn’t been to the cinema for three years until I went to the CW+ MediCinema on my own last year – and it was just what I needed. Now I go whenever I can when Sienna’s in, and have some all-important ‘me time’ for once.

"People underestimate the importance of laughter and normality – and that is just what the CW+ MediCinema has meant to Sienna and I – but it is so much more than that."

Sienna starts school this autumn, and while Mandy is anticipating that the exposure to other kids and their illnesses will mean more time in hospital for Sienna, we wish her all the best of luck and will be there to welcome her for a movie when she is in!